How to Tell If Your Man is Cheating 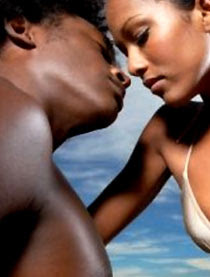 So in Top 5 Signs You are Not His (Only) Woman seems like those who commented on the post wanted to know how to tell if your man was cheating:

I dig what you're saying but what about the supposed wifey/main chick who hears from him at regular hours, has met his friends and family, gets taken out, etc. yet is still being cheated on? How's she supposed to know? That's a list I'd like to read = )
- Jennifer

However, what about the guy who is doing everything right, calling during the day, you have met his friends, you are super close, didn't give up the panties until months in.....but you find out he is cheating and wonder how did he pull it off?? Ain't that many hours in the day....lol
- Posh

Well, you know, I don't believe that there is a woman alive who doesn't know her man is cheating. I believe signs are everywhere and that women choose to ignore the obvious. You know your man and you know when something isn't right.

For example: With one of my exes who I was off and on with for a year or so, I always knew when he was about to bounce. He was the type who would always call when he said he would. ALWAYS. So when he's start not calling me back after saying he would call, I knew he was about to pull one of his disappearing acts. It never failed. It was always the same.

Another ex, would pick random fights with me for no reason when he was about to break up with me. Always. I knew it was coming because we would be fine and then for no reason he would cop a huge attitude, pick a fight and then bounce. My clue there was another woman.

So my point is, there are always signs. You're just (willfully) ignoring them. We all perform a certain level of cognitive dissonance in out lives and I don't know anyone who is more willingly delusional than a woman who doesn't want to believe her man is cheating.

Here are a few red flags that he may be tipping out:

1. Sudden Changes in Schedule/Routine. Did he used to go to the gym in the mornings and now he goes in the evening? Is there no real explanation for the change. Has he stopped doing something, or stated doing something that he wasn't doing before? Was there no warning and when you ask you get vague answers?

2. More Time at Work. Is he all of a sudden spending more time at work, but like the changes in schedule, it's abrupt with no warning. As far as you know there isn't any new project or responsibilities that he as at his job, but all of a sudden he seems to spend more and more time there. When you ask about all the new hours, he doesn't give you an answer that's worth the time he took to say it.

3. The Sex/Grooming/Weight Changes. This is actually the easiest way to tell if a woman is cheating but works for a man as well. Is the sex drastically different? More frequent? Less frequent? Is he doing different stuff? Is he spending more time on his looks then he was before? Has he started losing weight? Wearing cologne? Keeping a fresh cut? Dapper down?

Yeah, you might want to chalk the new found sexiness up to a new woman.

Unless you can catch someone explicitly in the act, all this is nothing more than speculation.

And too many times, speculation, not facts destroy good things.

The last sentence you said is really what should have been said from the very beginning:

"Is he cheating," the real question is, "What are you going to do about it?.

That is really the solution. In fact, that's an upfront question that should be asked early. People should know if they marry someone who is mature enough to understand humans can get sexually attracted versus some insecure control freak that is so obsessed with the speculative thought of "cheating", it cripples everything.

Unless you can catch someone explicitly in the act, all this is nothing more than speculation.

And too many times, speculation, not facts destroy good things.

I don't know too many people who speculate their way out of a relationship.

Are their people who always think someone is cheating...yeah, but they were like that from the beginning.

You don't have to "catch someone in the act," to know someone is cheating. People regularly ignore the obvious because they don't want to be accused of "speculating."

Stop ignoring the obvious and then decide what you are going to do.

To me those are the signs that the relationship is changing for the worse but not law that he is cheating.

I believe what ever is done in the dark will always come to the light no need stressing your self about it.

Speculation is the #1 killer of relationships.

The top 3 three you listed happens to professionals working at Big Six consulting firm. And most people, particularly working under clearance or NDA arrangements fall in that category to.

But you are right, by the time they asking the question, they should leave the relationship.

The top 3 I mentioned where under the pre-text that there was no rhyme, reason, explanation or warning that said changes were needed or necessary.

How many chicks are dealing with cats at Big Six consulting firms or other high powered jobs?

Most chicks are dealing with regular dudes with very predictable schedules and lives.

If you've got a big ballin' dude with a high powered job then you know his schedule and his patterns that would be red flags to you.

Like I said, I don't know too many folk that "speculate" there way out of a relationship.

I do know many who overlook obvious signs of he/she's tipping and then run themselves ragged trying to figure out if "he's cheating."

When the idea or thought of him cheating comes to mind, then more than likely he's done something to hint around to it. Most of the time we will ignore our intuition.

I had to laugh about at the picking a fight one. That's what alerted me to one of my exes cheating ways. He would do his best to pick a fight. One day I tested him and wouldn't argue with him at all. I could tell he was getting frustrated. When I got tired of playing with him in that way, I called him on the carpet about it. Of course he lied and denied--but the truth has a way of showing up.